Well, here we go… and here is a picture of us going:

And here is another picture as evidence that we actually started at Lands End: 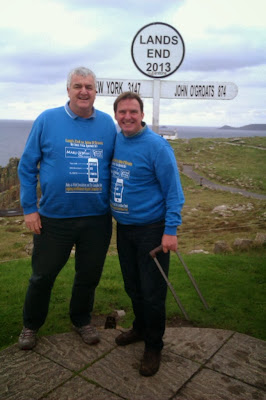 So, highlights of the day so far? Well, it turns out that the problem of ‘the suitcase handle’ is going to follow us on this trip… with sporadic photographs including said handle being released… who knows we could start a few competitions – spot the handle or where’s handle?.
We arrived nicely early at Lands End to find that, due to the signpost being a privatised thing, it was missing and not due to arrive until 10am! There was, however, a temporary Lands End signpost, which did quite nicely so photographs were taken and we moved on to the bus stop – proudly displaying its OmniSTOP sign. We also had surprise visitor number 1; a lady called Anne who looked after Cariad for some months earlier this year. A lovely surprise! 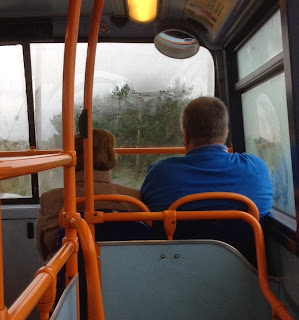 And so departed Lands End, on the first bus of the day; Western Greyhound (501). Michael sitting up top and at the front with his Wife, Wendy… they make a lovely couple (even if she is indulging his bus fetish!) Surprisingly (to me at least) this was a double decker – squeezing itself down the lanes and under low flying trees!
Arriving at Penzance Bus Station, Phil (who very kindly put us up for the night and gave us a lift from St Austell to Lands End) was there to greet us with a smile! However, the connection to Truro was ready and waiting for us (well, it was the earlier bus… which was running late probably due to a slow moving tractor). And so we find ourselves in Truro – eating a cake and drinking coffee.
Oh, and the saga of the suitcase? Well, let’s just say we had a result at Argos and things are trundling once again. Picture to follow once we can work out how to get them off of Michaels camera!
More later:-) Jez
Posted by 146 Cider at 13:01