We left off boarded onto the ‘Trans Peak’, run by High Peak… who are run by Bowers Coaches… oh, its just too complicated! Anyway, Mr MANGO man had announced us as people boarded – he wasn’t allowed on the bus itself. So everyone on the bus knew who we were. And as we departed, waved off and almost chased by a MANGO a number of people asked about our trip – the highs and lows, what it was all for… and told us about the double deckers that used to run this route before one took its top off on a bridge.
The most vocal, and amiable, people belonged to a walking club of retired gentlemen. No, sorry, they weren’t a club (they insisted) but they met every Friday to go off for a walk in the hills. In the summer they take sandwiches and in the winter (very sensibly) they have a hot meal at a pub. They donned all the gear too – although one or two of them were wearing shorts – which I thought was either brave or just optimistic.
The newly dubbed ‘Last of the Summer Wine Walking Club’ were quite funny to listen to… proof again that the older generation behave more like school kids than school kids do these days (well private school children in Rutland). We chatted probably for about half the journey which, whilst raining, had some stunning scenery… and lots of mist too!﻿﻿
The mist hidden scenery eventually gave way to urban-ness – which was going to be our view for the rest of the day. We worked our way through to Manchester city centre without much fuss. Our next scheduled stop for day 5 was a trip to the offices of Omnibus… normally I am here once or twice a month to work but today who knew what would be happening.
From here on for a while, buses were frequent so we could catch one out to Hollinwood without much fuss. But first, following the age old advice “If in doubt, get it out” (thank you Michael for that one!) we had a cheeky comfort break at the local Wetherspoons. Thanks once again Tim Martin (CEO of Wetherspoons). I will have to write to him and see if he will sponsor us back what we have spent (although on this particular occasion it was only a penny:-)

And so onto the 184 towards Oldham. As many times before, we snaffled the top front seats (best view on the bus!) and made out way back out of Manchester. To some extent this trip, and the one back in again were superfluous to our journey – in as much as it didn’t get us further to our destination. However, this was an important break. Our employers, Omnibus, who have supported this mad adventure from the off in every conceivable way were waiting at the other end. I knew that it was likely to involve an additional bus… the company own an old London Routemaster and I had heard a whisper about ‘bus movements’. What I hadn’t expected was that it was following our bus – I received a text to say so about half way through the journey.
We were met, with the MD Peter Crichton driving and once the driver of the 184 had had a chance to say that he wanted to have a go, We sped off with driver Crichton, conductor Carol Crichton and a few inspectors on board. Now, when you are only turning up to the office for an hour, usually the best hour to turn up is the lunch hour. And having taken a few photographs with the bus (not running in service, but who really cares!) all the staff in the office enjoyed lunch while Michael swapped out his grubby clothes for fresh – my bag was big enough for the whole journey:-)….or is it foolish enough to carry everything for the whole trip when I could have had staging posts? Was that why the first case disintegrated? (Michael added that bit!)
Such lovely people and, once we had given them a few tip-bits from the days activities, watched the Rod Gilbert sketch about the suitcase handle (http://youtu.be/OISGykO6Z7U) and had a nice chat with David Abraham… good guy and escaped… not, I mean retired from the Omnibus and now a professional bird botherer. No… that sounds all wrong. Never mind, Michael will edit that bit out……(he is a twitcher)
On we went. Taking the First Bus 180 back to Manchester and hopping aboard the First Bus 8 to Bolton. Timings are more flexible in urban settings – buses are far more frequent. However, Michael was very pleased that the bus we caught was the one we had planned to.﻿﻿﻿﻿﻿
Not much to say about Bolton, except the toilets were shut… we connected with our next bus to Preston, Stagecoach 125, and headed out to queue in traffic some more. At Preston, it was another fairly tight bus swap… but a successful one. Just as well as had we missed it we would have encountered some fairly major evening roadwork diversions out towards Lancaster. 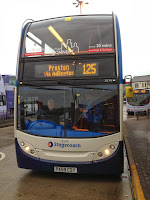 Finally, we arrived in Lancaster. Tired but not weary; it had been another exhilarating day of activity. A plus was finding our Travelodge was next door to a Wetherspoons. (please note Tim…how many name checks does it take).  Less of a plus was finding out that seemingly every student in Lancaster was at that pub. Still, I sit and write this happily in the knowledge that we are nearly into Scotland and onto the final stretch of the journey.
Mr MANGO… what a guy!.........never going to have a smoothie again.
_________________________________________
Postscript:
We hope you are enjoying our exploits so far on our journey around the country. We aren't there yet, and we are mindful that we are doing this not for the craic but for good causes.
On our trip today, we made a big thing about getting to the 6 fat ladies. Well, we achieved that - thanks to everyone who has donated so far! Our next goal, in honour of the man himself is to reach and surpass £10,000 - which we now refer to as 'The Great Mango'.
So, if you have yet to donate, we encourage you to do so - we'd like to take that Mango to John O'Groats with us.. more if possible.
Oh, and thanks for reading. There is more in store yet!!
http://www.justgiving.com/Blossom-Appeal-Cariad-Rose-Trust 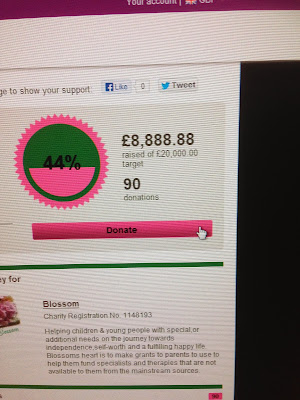