Two buses down and not only does my phone need recharging (hamster battery!) but we both could use a cup of coffee and something to recharge our own batteries.


As we had caught the earlier bus, our stopover in Truro was longer – which gave us time to seek out an Argos, buy a new case (and put the old case into the new case…) and then spend some time catching up with things in Costa. Michael then decided to test the wheels of the new case by walking up and down some cobbled streets… nice!

And so on to the third bus of the day, courtesy of Western Greyhound once again (594). This took us to Wadebridge where we had a further hour to spare for afternoon tea. Everything was fitting in to place nicely. Wadebridge was pretty and – as with all the other towns so far – not a Greggs in sight!

Our fourth bus, Western Greyhound service 510 was on time and not that full. It is a shame that these services are not better used by people – they are great. Come on Cornish people! This was a small bus (Optare Solo) just like the last one and, like the last one, the route took in both scenic beauty as well as a couple of industrial sites… this time a garden wholesalers too! The best bit though was the journey itself! I am not a regular bus user; when I use a bus it is to get from A to B and there is little else in it for me. This one was… I think I described it as exhilarating. We soared from Wadebridge and through Launceston on to Okehampton. For the benefit of Western Greyhound, I am not saying that this is bad! No – this was the most enjoyable bus journey I think I have ever had. We arrived at Exeter Bus Station on time (and the bus span off, doing donuts round the car park as it left:-) 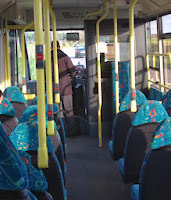 One thing to note (for all the larger bus operators out there) – half way through the journey to Exeter… from out of the middle of nowhere (Hallworthy)… the bus was boarded by an inspector. A real live inspector!! He even checked our tickets – and here is the photographic proof!
At Exeter we were met by Jackie, another Omnibus ‘outworker’, who brought us food (and some apples) and Juliana Meilton… no, not Michael’s sister but a ‘never met’ Facebook acquaintance with the same name. Something fishy… definitely (although I was informed by 7 foot Michael that most Meiltons are short and dumpy – Juliana was short but not dumpy… I wonder how much Michael really knows about his own family!!)
Our last bus of the day was the First Bus X53 ‘Jurassic Bus’. There wasn’t a whole lot to see as it was dark, but the highlight was my trying to get on to the bus using my Stagecoach pass instead of my First Group pass. Well, I guess it started a conversation and I suspect the local depot is being flooded with LEJOG Charity Newsletters as this is posted!

One final thing. All the drivers today have been delightful! However, a special thanks goes to the X53 driver, who not only let me on to the bus after having been an idiot but went beyond the call of duty and was so friendly and helpful!
Tonight in the Tiger inn in Bridport - well worth a visit;  ale is excellent... Michael will be heavy to carry up stairs!  We should leave before breakfast to catch the 0811 bus BUT the landlord insists he will have a Bacon sandwich for us eat or  to take out at 0745