Here it is. The last day. The last couple of buses… Would John O’Groats be privatised? Would we be allowed to have a photograph? The mood was tense.


Actually it was fairly relaxed. Michael needed a map so, catching the 5 into town again we did a bit of searching around. Then found the bus station… and went for a coffee. 0940 was the departure time and we boarded on the X99 ready to go.
This has to go down as one of the most stunning bus journeys in the UK. Gorgeous. We sat at the front (to get a better view) – and what a view. With running commentary of a local I failed to see seals and was told all about the Cromarty Bridge as we crossed it. ‘Wended’ is a word that I have used a few times, but surely it was meant for this journey. 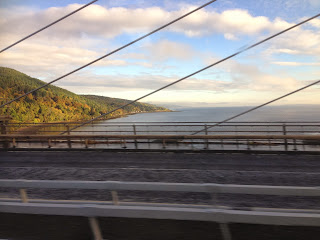 Things are a touch more relaxed on the Highland buses. At each stop (or hint of a stop) one older gentleman was up and ready, cigarette in hand to disembark and smoke it. As there were no toilets on board, we stopped in Dornoch for a toilet (and another cigarette break for the old guy.) Me, well I took photographs… just as Michael regaled his family history in Exeter this was my chance for revenge. Soon I was spotting Mowat names on memorials and even a print and copy shop. Michael said that I was “a spelling mistake”… though to be fair, he is too! 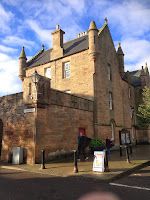 ﻿We changed buses at Dunbeath, on board the X97, as the X99 didn’t go to John O’Groats. All well, the journey this time got flatter and more straight forward – although we had to drive up and down a couple of mountains before it flattened out.


I have been here before, Caithness is a pretty wild place. I cannot use the term ‘desolate’ as there is plenty of life up here, but it is an untamed place. 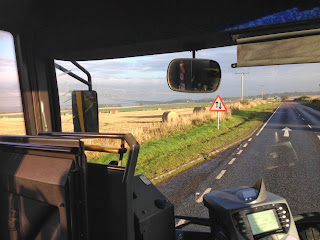 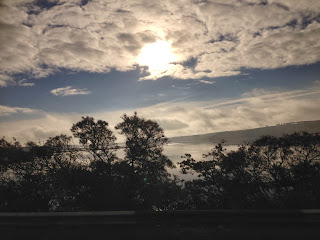 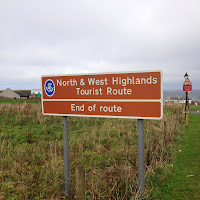 We entered John O’Groats, the town and got off some 500 metres or so before the attraction that is the sign and shops. ‘Great, let me just post that we have arrived’… nope… let’s try again. No. Facebook had clearly had a melt down with the sheer number of people following us today. Actually, that may be a little big headed, but it was’t working – proof positive that while the buses were reliable in getting us from Lands End to John O’Groats, Facebook couldn’t quite hack it.
So, singing our choice of radio songs to ourselves… “I would walk 500 metres”, the wheelie case complaint just a little more and we were there. Peter and Carol had arrived first and snapped away at our triumphant entrance. Well, we walked past them in any case, laughing about where the sign may be and would we have to pay to get near it. Thankfully, it isn’t off limits and we had a number of photographs before going for another coffee break and taking a look at the most tacky gifts in the gift shop for the families. 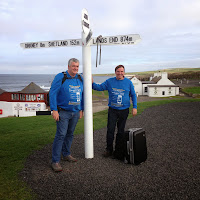 And that, ladies, gentlemen and everyone else is that. Lands End to John O’Groats (via Ipswich) by bus was completed.
Our last journey was ahead of us, but I felt the wheelie case could do with a rest before the wheels fell off – so it went into Peters car boot. Silently, we walked to the bus stop and caught our last ‘official’ LEJOG bus. The Stagecoach 80 service is a slightly older style of coach; manual shift and creaky. However, the driver kept us well informed of every sight (and every new house that was being built)! This was a village bus. So much of getting to John O'Groats has been focused on getting buses from A to B.  This was a bus that went via C,D,E,F,G,H,I,J and K en-route to B, so we found ourselves bouncing up single track roads to a collection of three or four houses and turning round. We picked up a lady walking her dogs (although one was more the size of a sturdy Highland Cow!) and carried a mile or so back home.  We passed the drivers house – which he pointed out and saw views across Dunnet Bay as we came to Thurso. Very much a bus for the community rather than a straight A to B route and pleasing to see some of the community were out using it.  The driver helpfully dropped us outside the wrong B & B – but there are so many places around here with Pentland in the name!


Looking at the figures it seems we have now reached in excess of £11,400 which is truly brilliant – it could even go as far as covering the fares we have paid!!! (only joking). Thank you to all who have contributed.. and those of you who meant to..  but will do so now to ease your conscious.
What next – well we will part our ways.  Jez will head back south whilst Michael will push on further!  Keep watching to make sure we get home!!
Oh, wait. would you like to know what happened to the case handle? Was the ASBO just too much for it - did it fling itself into the sea or has it now decided to go and live in a small communal group somewhere in the Highlands? Well, take a look... 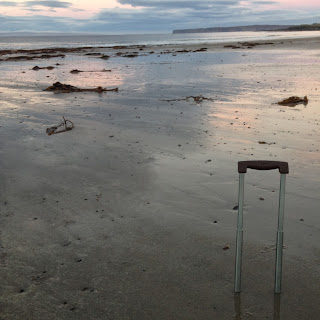 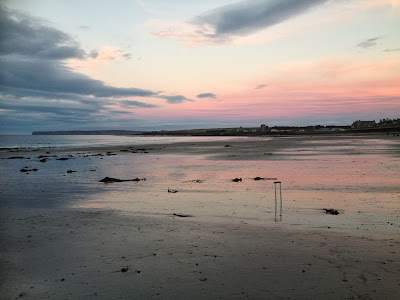