Car crashes! Police raids! Numbus Bumus! Hang on tight as todays journey sees us enter Scotland and screech to a halt at Dundee.

OK, that could be just me trying to spice up a rather uneventful day of travelling. However, all these things really did happen as we sat on the North of England and Scotlands finest.

It wasn’t a particularly early start for us this morning – 07:30 out the door to catch the 08:20 Stagecoach 555 from Lancaster into the Lakes to Keswick. Given that the students partied hard nearby the hotel until after 02:00 (I know, I was writing blog and playing with our radio broadcast!), I tried to make as much noise as possible as I trundled down the cobbled streets to the bus station. LEJOG off-road wheelie case it very good at making noise! Whilst it would have given me great pleasure in saying that we did not need to frequent a Gregg’s for the whole journey (apart from  a bottle of water in Winchester) we queued at the door… a queue of 2… Michael and I… as we really had little faith in the ‘Breakfast Box’ that we were given at the hotel. 0800 then bolts were flung back and in we went!

Stash in hand we headed for the bus… in the knowledge that if things went to plan we would hardly be off a bus until we got to Edinburgh over 8 hours later. This would either need strong bladders or answered prayers!

The 555 route from Lancaster up to Keswick has the potential to be very enjoyable. It was a double decker – we had the front seats and it goes via Kendal, Windermere, Ambleside and Grasmere.. or at least I think that is what emerged from the murk.  The weather was wet… and misty.  Some say there are hills around.. to us it is was either lashing rain against the windows or white mist.  There was the odd glimpse of water but not much more. 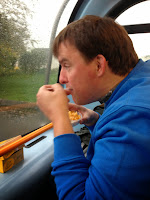 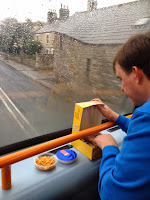 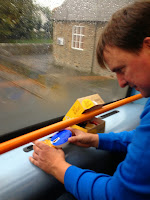 Despite the rather foul weather it was pleasing to see all the Open Top buses running around, albeit with very few passengers. The option to get off and sample one crossed our minds.. but the thought did not linger long.  Whilst we could not see much around us – we could see the road ahead.. for a few hundred yards, which was fortunate as we turned a corner just before Windermere to find a car in the road – on its roof. Skilfully we avoided this obstruction and continued – as scheduled – leaving others to await the arrival of the emergency services. The loadings on this journey were quite good – which shows that true British ramblers will go out rambling whatever the weather.

Time keeping today was very good and we arrived in Keswick only a couple of minutes late and in time to catch our X4 coach to Penrith.
We set off on a coach type bus – they use coaches up here for bus transport often. Very shortly after, we picked up a couple of ramblers and were then promptly held at the stop whilst a policeman boarded chatted to someone and walked up and down the aisle looking for something. He got off and we continued out of Keswick.

We were then stopped again by the same policeman, who this time removed a man and his luggage from the side locker, hand cuffed him and began to ask him questions and rummage through his belongings. The other passengers were suitably nosy and a few stood up to get a better view. It all unfolded just outside from where Michael and I were sitting, so we didn’t need to move – I even got a photo (before receiving a stern look from both policeman and his prey!) We briefly hatched a plan to step off the bus and get a photo with the case handle… you know, one for the album, but resisted due to our commitment to actually completing the journey!

Suspect apprehended, we departed and motored on to Penrith. Surprisingly we were only 5 minutes late and made our connection to Carlisle, Stagecoach 104 with a loo trip for Michael whilst the other passengers boarded first (after all we are gentlemen)!. A very efficient and quick service, it got us to Carlisle Station in plenty of time to ‘get it out’ and make First Bus X95.

One curious note, we got to talking about the film rights to our journey (surely it is going to be sold for vast profit sooner or later). We both decided that I should be played by Euan McGregor though I look perhaps a lot more like James Martin (there are photo’s of us both stood together to prove it, but he can’t dance and I have reservations about his acting ability). Michael was a bit trickier… I must confess I have come up with some disparaging suggestions but the choices are currently Harrison Ford, Richard Gere or Steve Martin. Mr Mango was a clear choice of Matt Lucas (although I expect the great Mango would want to play himself). Other parts have yet to be decided, although the Stig would make a great Cornish driver.

An easy itinerary tomorrow – there aren’t that many buses up here so services tend to be a bit more straight forward… and bladder control won’t be such a balancing act!!